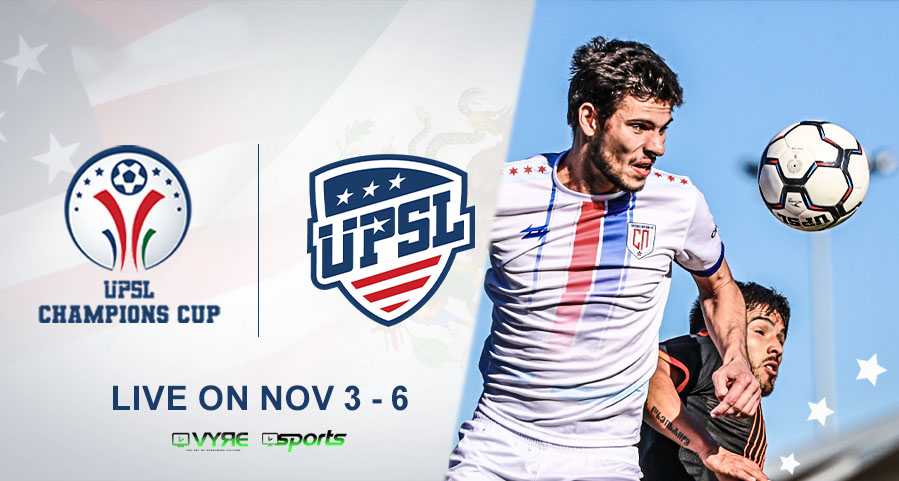 Under this partnership, the VYRE Sports channel will carry the UPSL regular season, playoffs, and championship games. Beginning in November, VYRE Network will stream up to 36 games of the current 2022 Fall Season. This would include National Semifinals, 3rd Place, and National Championship matches as well as the UPSL Champions Cup taking place in Querétaro, Mexico November 3 – 6. The Champions Cup will feature teams from both the U.S. and Mexico. VYRE is also planning to create original content that is based around the league, its athletes, and topics relevant to the game of soccer.

VYRE Sports currently consists of multiple sports leagues including boxing through BXNG TV, women’s professional football with the exclusive broadcasting of the WNFC (Women’s National Football Conference), and most recently, the 2022 season of the Big3 Basketball league. With this latest addition to VYRE Sports, VYRE takes a giant step into the soccer industry.

“We are proud to add UPSL soccer to VYRE Sports to continue to fulfill our mission of showcasing the next generation of athletes that may not receive global or even national recognition. We feel that this is a great opportunity to help build the community through soccer and other sports,” – Lamar Seay, COO VYRE Sports.

The United Premier Soccer League is the largest pro-development league in North America. Made up of over 400 clubs who compete nationwide, the UPSL has built a structure that fills the large gap between the youth game and the professional game. With an average player age of 22.5 years old, the league provides a home for thousands of aspiring players and coaches as they strive to further their aspirations and fuel their passions.

In January 2020, the UPSL was acquired by ELP Brands. In 2021, the league announced the launch of UPSL MX as well as the UPSL Women’s division. Earlier this year the UPSL was unanimously approved to become a direct affiliate of the US Soccer Federation.

“Since our inception in 2011, we have worked tirelessly to build a platform which brings together and showcases the best undiscovered talent in America. Our partnership with VYRE is a major step forward in shinning a light on our players as they pursue their dream of playing professionally. We are proud to partner with Lamar, David and the entire team at VYRE as we work to bring the UPSL and its player to the world,” – Luin Frazier, COO UPSL.

“VYRE Sports has proven its ability to showcase top level professional and amateur sporting events, this new relationship with UPSL will only make VYRE Sports offering stronger as they expose the next generation of young soccer talent to an international audience,” – Tim Summiel, VYRE Sports Advisor

The UPSL was formed in 2011 and occupies the unofficial fourth tier of US Soccer. Across its Premier, Division 1 and Women’s leagues there are more than 400 teams competing nationwide. The UPSL is now the largest Pro Development League in North America and is a National Affiliate member of the U.S. Soccer Federation (USSF). Each UPSL team is individually owned and operated. UPSL teams are eligible to participate in the U.S. Open Cup Qualifying Rounds through the league’s affiliation with USSF.

VYRE Network is a free global streaming platform through Apple TV, Roku, Amazon Fire Stick, Android, iPhone, Samsung TVs and on the web. Focused on showcasing the next generation of film creators, and athletes. VYRE Network sets out to become the most relevant content streaming company for those of all ages, backgrounds, and interests.

Forward-Looking Statements – This release includes forward-looking statements within the meaning of Section 27A of the Securities Act of 1933, as amended, and Section 21E of the Securities Exchange Act of 1934. Such statements include any that may predict, forecast, indicate, or imply future results, performance or achievements, and may contain the words estimate, project, intend, forecast, anticipate, plan, planning, expect, believe, likely, should, could, would, may or similar words or expressions. Such statements are not guarantees of future performance and are subject to risks and uncertainties that could cause the Company’s actual results and financial position to differ materially from those in such statements, which involve risks and uncertainties, including those relating to the Company’s ability to grow. Actual results may differ materially from those predicted and any reported should not be considered an indication of future performance. Potential risks and uncertainties include the Company’s operating history and resources, together with all usual and common economic, competitive, and equity market conditions/risks.