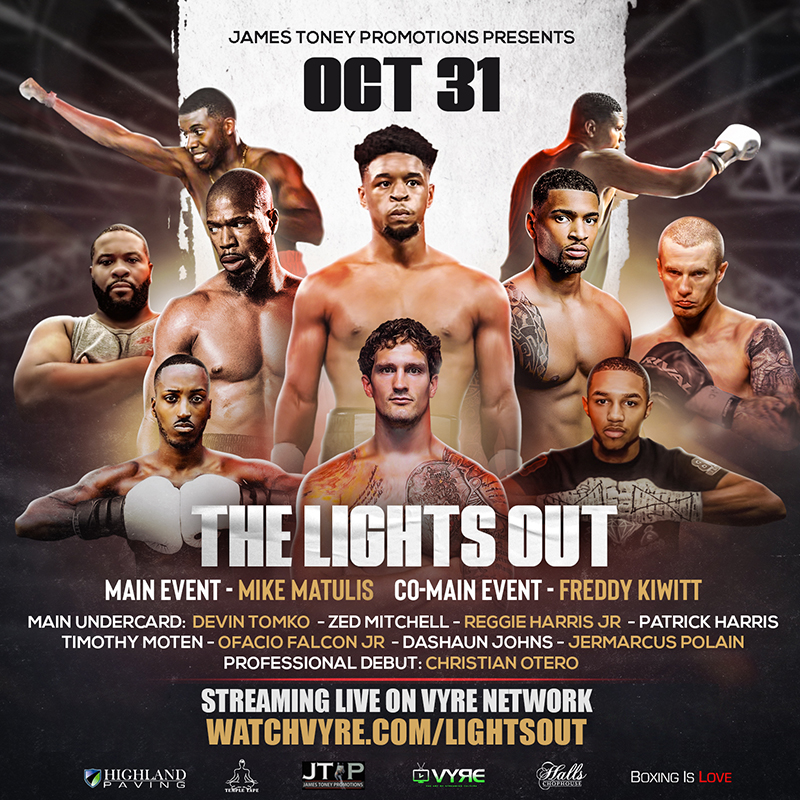 On Saturday, October 31st, James Toney Promotions & Vyre Sports will team up for an exciting evening at the fights. “Boxing with Lights Out” will livestream from Columbia, South Carolina, where Vyre will be showcasing 10 amazing fights.  The card will include co- Main Events featuring, hometown hero and Heavyweight Prospect, Mike Matulis, and one of boxing’s most exciting young prospects, undefeated.

Mike Matulis is a former USC Gamecock Offensive Lineman, now heavyweight prodigy. He stands 6’6” and 260lbs and possesses ridiculous athleticism for his size.

Patrick Harris, undefeated in 19 bouts, comes from a long lineage of notable Boxing Icons. His father Patrice “Boogie” Harris, and Barry Hunter revered as the sports top trainers, have prepared Patrick for greatness his entire life.  Do not miss the opportunity to see these, and countless other budding stars in their latest epic bouts, LIVE. Only on VYRE Sports.

This anticipated event is packed with future stars and will live stream exclusively on Vyre Network through Apple TV, Amazon Fire Stick, Roku, iPhone, and Android across the globe. The full undercard will be available prior to the main events.

You can purchase exclusive livestream access to “Boxing with Lights Out” on the Vyre Network website for only $9.99 at www.watchvyre.com/lightsout right now. Then download the Vyre Network app free of charge and check out the fight.

The live broadcast of “Boxing with Lights Out” will begin at 6:00 p.m. ET/3:00 p.m. PT. Boxing fans throughout the world can watch the event from anywhere through Vyre Networks platform.

The undercard for this event will feature a full evening of action with rising stars; Devin Tomko, Reggie Harris JR., Timothy Moten, Ofacio Falcon Jr., Dashaun Johns, Jermarcus Polain, and Damonta Little, fighting for recognition to solidify their spot as a rising star in the sport of boxing.

Established in 2018, James Toney Promotions has emerged as one of the industries fastest-growing boxing promotional companies. Currently, they have eight events planned from Oct 2020 to the end of 2021. The goal for each event is to provide fans with the highest quality “Vegas-Style” boxing experience, consisting of top talent from around the world, but hosted mainly in smaller markets that have been most economically impacted by the current pandemic.

James “Lights Out” Toney is among the most decorated professional boxers in history. With a professional record of 77-10 spanning 20 years, he’s competed in 15 world championship fights in 4 weight divisions, while winning titles in three weight classes. He held the IBF and Lineal Middleweight Championship from 1991-1993, the IBF Super Middleweight Championship from 1993-1994, and the IBF Cruiserweight Title in 2003. In 1991 and 2003, Toney was voted “Fighter of the Year” by The Ring magazine and the Boxing Writers Association of America. In 2011, The Ring magazine ranked him as tenth on their list of the “10 best middleweight titleholders of the last 50 years

Vyre Network is home to a global digital distribution multi-platform service that licenses, live streams, and produces a vast catalog of exclusive content for streaming entertainment.

They represent a visually driven culture of millennials and Generation X, Y, and Z’s expression of the visuals that we love the most; entertaining, informal, and original shows, feature films, short films, music videos, live events, and more.

admcreativeAugust 12, 2019
Vyre Network inks a deal with the powerful and informative web series, “The...

Vyre Network’s Comedy Channel ‘Unnecessary Humor’ Teams Up With One11 Media To...